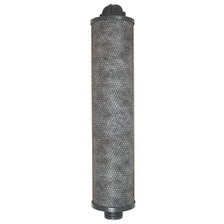 The Watts Big Bubba BBC-150-ACP Spiral-Wound Activated Carbon Filter Cartridge is a 5 micron rated activated carbon filter for both removing chlorine, taste, and odor, but also particle filtration up to 5 microns like a sediment filter with a high dirt holding capacity. The BBC-150-ACP releases no carbon fines, has no channeling or bypass, and is made of FDA-compliant materials. Because of its design, the filter does restrict flow rate of the Big Bubba system, and is rated at 12 gallons per minute though with an approximate 200,000 gallon life. The BBC-150-ACP is a proprietary filter cartridge for the Big Bubba BBH-150 series filter housings.